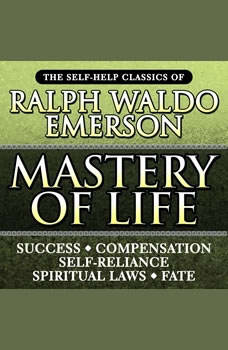 Mastery of Life: The Self-Help Classics of Ralph Waldo Emerson

The great writings of American transcendentalist philosopher Ralph Waldo Emerson (1803-1882) are not some distant ponderings on life - they are works of the highest practicality, intended to supply guidance and daily help. Emerson's ideas arose from his simple observations of human existence, with all its pitfalls and possibilities. Reading and listening to Emerson brings the wisdom of the ages down to earth. This collection is drawn from his most practical and best-loved works. Each points you toward better and fuller ways of living. 1. "Success" 2. "Compensation" 3. "Self-Reliance" 4. "Spiritual Laws" 5. "Fate"