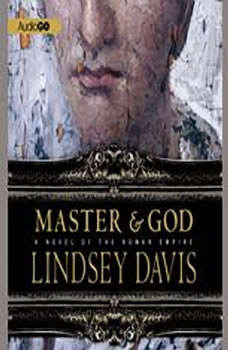 Master and God: A Novel of the Roman Empire

Lindsey Davis' Master and God is a vastly entertaining historical novel set in the reign of the Emperor Domitian in First Century Rome. It is on the one hand a love story between Gaius Vinius Clodianus, a valiant but reluctant member of the Praetorian Guard, whose military career is as successful as his marital history is disastrous, and Flavia Lucilla, daughter of a freed slave, and hairdresser to the ladies of the imperial household. A devastating fire in Rome brings them together as apartment-mates whose relationship survives separation and the apparent death of Gaius, evolving into a bond of real passion and understanding. It is also the story of the seizure of power by the Emperor Domitian, his increasing paranoia and madness as he styles himself Master and God. As Domitian's cruelties to his enemies and those he only thinks are enemies grows, the future of Rome demands desperate measures, measures that demand Gaius choose between his sworn duty to protect the Emperor becoming part of the forces arrayed against him.

Not as interesting as the blurb on the back made it out to be. I quit reading this at about page 73. Someone on Amazon only made it to 64 I was hoping that it would pick up sooner, rather than later, but when theres a housefly POV is when Ive got give up. Theres a better story on the rise and fall of Domitian in Empire: The Novel of Imperial Rome by Steven Saylor.