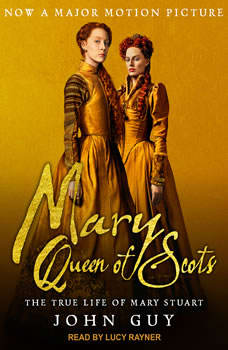 Mary Queen of Scots: The True Life of Mary Stuart

In the first full-scale biography of Mary Stuart in more than thirty years, John Guy creates an intimate and absorbing portrait of one of history's most famous women, depicting her world and her place in the sweep of history with stunning immediacy. Bringing together all surviving documents and uncovering a trove of new sources for the first time, Guy dispels the popular image of Mary Queen of Scots as a romantic leading lady—achieving her ends through feminine wiles—and establishes her as the intellectual and political equal of Elizabeth I. Through Guy's pioneering research and superbly readable prose, we come to see Mary as a skillful diplomat, maneuvering ingeniously among a dizzying array of factions that sought to control or dethrone her. Mary Queen of Scots is an enthralling, myth-shattering look at a complex woman and ruler and her time.

NEW YORK TIMES BESTSELLER • Perfect for fans of The Crown, this magisterial biography of Queen Elizabeth II is a close-up view of the woman we’ve known only from a distance—and a captivating window into the last great monarchy....

Catherine the Great: Portrait of a Woman
by Robert K. Massie

The Pulitzer Prize–winning author of Peter the Great, Nicholas and Alexandra, and The Romanovs returns with another masterpiece of narrative biography, the extraordinary story of an obscure young German princess who traveled to Russia at fourt...

The riveting true story of mother-and-daughter queens Catherine de' Medici and Marguerite de Valois, whose wildly divergent personalities and turbulent relationship changed the shape of their tempestuous and dangerous century.Set in magnificent Ren...

A behind-the-scenes look into the life of Meghan Markle and her romance with Prince Harry—a dishy, delightful must-listen filled with exclusive insights for anyone obsessed with the Royal Family.Leslie Carroll’s books on royalty are ...

Ten years after her death, Princess Diana remains a mystery. Was she “the people’s princess,” who electrified the world with her beauty and humanitarian missions? Or was she a manipulative, media-savvy neurotic who nearly brought d...

"Intensely well researched and an un-put-down-able read, Tina Brown's extraordinary book parts the brocaded velvet and allows us an unprecedented look at the world and mind of the most famous person on the planet. A social commentary, a historical d...