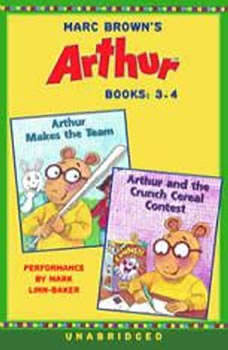 #3 - Arthur Makes the Team – It feels as if it'll be a long season for Arthur as he struggles to sharpen his baseball skills and ends up learning an important lesson about teamwork.

#4 - Arthur and the Crunch Cereal Contest – There's a year's worth of Crunch Cereal on the line...and it'll be awarded to the composer of the best jingle. Arthur is so determined to win, he almost forgets about fairness.

This collection includes:ARTHUR'S FAMILY VACATION: In this Arthur Adventure, our favorite aardvark is unhappy about going on vacation with his family. But when their trip is rained out and the family ends up stuck in a motel, he shows them how to ...

It looks like trouble when the principal asks Arthur to take home a large envelope marked CONFIDENTIAL. His friends try to guess what’s inside. It might just be information on . . . summer school! Will Arthur face the consequences or pretend t...