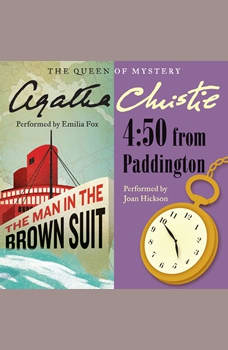 Man in the Brown Suit & 4:50 From Paddington

From the Queen of Mystery, The Man in the Brown Suit, in which a young woman makes a dangerous decision to investigate a shocking “accidental” death she witnesses at a London tube station, and in 4:50 From Paddington, a woman in one train witnesses a murder occurring in another passing one…and only Miss Marple believes her story.

THE MAN IN THE BROWN SUIT

Pretty, young Anne came to London looking for adventure. In fact, adventure comes looking for her—and finds her immediately at Hyde Park Corner tube station. Anne is present on the platform when a thin man, reeking of mothballs, loses his balance and is electrocuted on the rails.

The Scotland Yard verdict is accidental death. But Anne is not satisfied. After all, who was the man in the brown suit who examined the body? And why did he race off, leaving a cryptic message behind: "17-122 Kilmorden Castle"?

Twisty, clever, and intriguing, The Man in the Brown Suit showcases Agatha Christie once again at her very best.

For an instant the two trains ran side by side. In that frozen moment, Elspeth McGillicuddy stared helplessly out of her carriage window as a man tightened his grip around a woman's throat. The body crumpled. Then the other train drew away. But who, apart from Mrs. McGillicuddy's friend Jane Marple, would take her story seriously? After all, there are no other witnesses, no suspects, and no case -- for there is no corpse, and no one is missing.

Miss Marple asks her highly efficient and intelligent young friend Lucy Eyelesbarrow to infiltrate the Crackenthorpe family, who seem to be at the heart of the mystery, and help unmask a murderer.