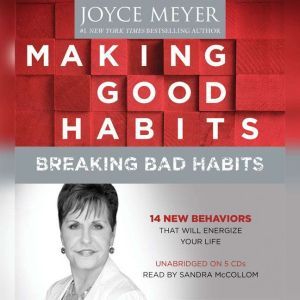 Nearly everything we do in life is the result of our habits. The good ones bring peace, joy and power into our lives, and the bad ones steal our peace and joy and prevent our success. In this book, Joyce Meyer explains how to develop good habits--the things you really want to do--and break the bad ones, putting an end to frustration, discouragement and stress that drains your energy. The most important habit comes first: the God habit. Next comes a willingness to work for the results you want. Joyce reminds us that, "if we don't pay the price for freedom, we will end up paying the price for bondage". Next comes the power of our words. Our words and the thoughts that propel them have tremendous power over our actions, and repeated actions are the basis of our habits.There are eleven more habits that Joyce discusses in depth, including the habits of happiness, faith, excellence, responsibility, generosity, discipline, decisiveness and confidence. "Choose one area and begin," she urges. "Don't feel overwhelmed by all the changes that are needed. One thing at a time, one day at a time is the best plan. Celebrate every day of success, and when you make mistakes, shake off the disappointment and keep going forward."You can transform your life, one habit at a time.