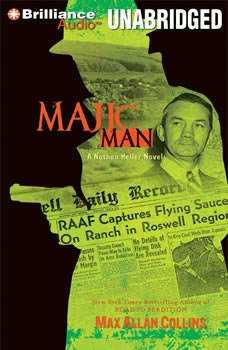 It’s 1949 in Washington, D.C., and Secretary of Defense James Forrestal, convinced he has been targeted for murder, hires Chicago P.I. Nate Heller for protection. Heller must deal with Beltway infighting, Communist paranoia, Israeli agents, and a mysterious military group called the Majestic Twelve in his journey to protect Forrestal. With his client locked away in a mental ward, Heller begins to doubt his own sanity as he explores reports of flying saucers landing near the tiny desert town of Roswell, New Mexico. Taking his unique brand of historical fiction to the highest seats of our country’s power structure, Max Allan Collins delivers a sordid tale long on wit and rich in detail. When Forrestal suspiciously commits “suicide,” the Chicago P.I. uncovers a top-secret, reprehensible alliance between the U.S. government and a Nazi cabal. With a supporting cast that includes Harry Truman, Teddy Kollek, Jack Anderson, and Drew Pearson, Majic Man is a who’s who of American post-war history. “Heller possesses a refreshingly gritty underside, reflected in a past that encompasses a stay in the psychiatric ward, perjury, and sensitive casework for the highest levels of society and government. There’s magic of a literary kind here: full-bore suspense coupled with an ingenious take on an overworked pop-historical touchstone.” —Publishers Weekly