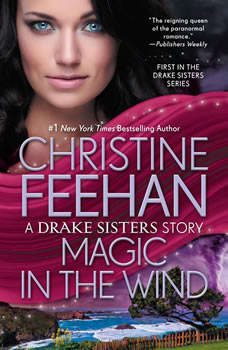 Magic in the Wind

First in the Drake Sisters series from the "reigning queen of the paranormal romance"--#1 New York Times bestselling author of the Carpathian and Sea Haven novels.

The story of Sarah, the eldest of the extraordinary—and magical—Drake sisters, now rewritten and expanded, in this very special collector’s edition…

“Sarah Drake has come home.” Ever since Damon Wilder sought refuge in Sea Haven, he’s heard the same breathless rumor pass the lips of nearly every local in the sleepy coastal town. Even the wind seems to whisper her name—a reverie so powerfully suggestive that it carries the curious Damon to Sarah’s clifftop home, and seeks to shelter him there.

But Damon has not arrived alone. A killer has tracked him to Sea Haven, and into the shadows of Drake House. But Sarah has her own secrets, and danger—as well as a desire more urgent than either has ever known—is just a whisper away…

Kiss of Crimson
by Lara Adrian

He comes to her more dead than alive, a towering black-clad stranger riddled with bullets and rapidly losing blood. As she struggles to save him, veterinarian Tess Culver is unaware that the man calling himself Dante is no man at all but one of the ...

For an introduction to the Drake Sister, I thought it was great. I was a little disappointed the book was short more like a novella, however the characters and love story didn't drag out, which could have happened if the story was made into a full book. I love the Drake sisters and how each is different and special in their unique way and I look forward to the other stories and seeing how they interact and apply their gifts to the world. I also enjoyed a reason why none are married and why they will suddenly start finding love, unlike other books where suddenly and entire group centuries old vampires start finding love within a few years.