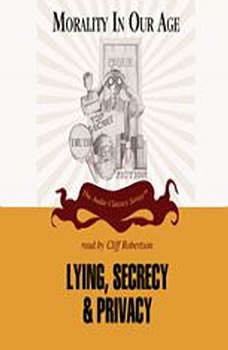 The moral command not to lie is among the simplest of all moral imperatives. Yet its counterpart, to tell the truth, is a subtle and complicated philosophical topic. Truthtelling is usually viewed as a prima facie dutya duty on first sight which may be overruled by other prima facie duties, such as reparation, justice, gratitude, nonmaleficence, beneficence, and selfimprovement. St. Thomas Aquinas (following Plato, Aristotle, and others) understood truth to be the correspondence between what we think and the way things really are. By contrast, Spinoza, Leibniz, Hegel, and others have favored a coherence theory, where a new truth must be logically valid and consistent with other known truths. David Hume and the American pragmatists emphasized the role of experience in identifying truth. Dietrich Bonhoeffer said truth is effective communication, and that it exists among a community of truth seekers (who can never reach the fullness of truth, which is God). The philosopher Sissela Bok defines a lie as any intentionally deceptive message which is stated. However, nondisclosure may also be a lie if its intentionally deceptive. Secrecy is sometimes a way of forming a special bond with another person or group; it may be a group strategy to secure power, prestige, or profit. Confidentiality is the protection of other peoples secrets. Privacy involves the access others have to our personal domain; it involves personal affairs, while secrecy may not. Privacy also may be seen as control over information about personal identity and intimate or sensual contact; it also may be seen as a standard of what is normal or legitimate to know about one another. The right to privacy is fundamentally in tension with the right to knowjust as private affairs are in tension with public affairs. Given the modern tendency to politicize private affairs, some have proposed redefining privacy as what one chooses to withdraw from public view.

Lying, Secrecy, and Privacy
The Morality in Our Age Series