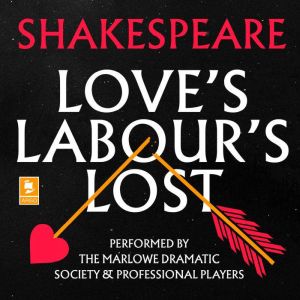 William Collins Books and Decca Records are proud to present ARGO Classics, a historic catalogue of classic prose and verse read by some of the world’s most renowned voices. Originally released as vinyl records, these expertly remastered stories are now available to download for the first time. ‘Love is familiar. Love is a devil. There is no evil angel but Love.’ Array After vowing to avoid women, the King and three of his friends have to host a princess and her three ladies. The four men fall in love and decide to court the women. In the end, the women must return to their kingdom for a year after which they will marry the king and his friends, providing they remain true to them. All of the Shakespeare plays within the ARGO Classics catalogue are performed by the Marlowe Dramatic Society and Professional Players. The Marlowe was founded in 1907 with a mission to focus on effective delivery of verse, respect the integrity of texts, and rescue neglected plays by Shakespeare’s contemporaries and the less performed plays of Shakespeare himself. The Marlowe has performed annually at Cambridge Arts Theatre since its opening in 1936 and continues to produce some of the finest actors of their generations. Thurston Dart, Professor of Music at London University and a Fellow of Jesus College Cambridge, directed the music for this production. The full cast includes: Derek Godfrey; Gary Watson; Peter Orr; Ian Lang; Robert Eddison; George Rylands; Max Adrian; Toby Robertson; Tony Church; Peter Woodthorpe; Michael Bates; Freda Dowie; Janette Richer; Prunella Scales; Diana Rigg; Susan Maryott; Patsy Byrne.