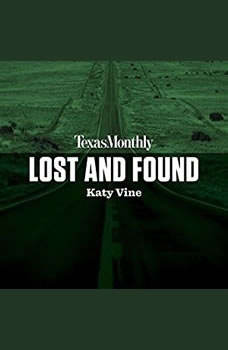 In partnership with Texas Monthly, Katy Vine's "Lost and Found" is now available as an audio download, where the length and timeliness of a podcast meets the high-quality production of a full-length audio program.

Katy Vine's "Lost and Found" is a thoughtful and uplifting look into a refugee community in the heart of Texas at a time when political sentiment surrounding refugees and immigration turned increasingly negative.

Texas is known nationwide for accepting a high ratio of refugees admitted to the United States. Though most end up in Houston, the smaller city of Amarillo has become a harbor for new immigrants looking to start anew. One key part of the vital Amarillo refugee community is Evelyn Lyles, a woman in her 60s who volunteers her time to help families assimilate and learn the ways of their new homeland. Her help ranges from assisting new families with the myriad forms and paperwork required of them; rallying community support to pay for steep medical bills; or simply, serving as a friendly, generous neighbor.

"Lost and Found" is a snapshot as life as a refugee, honing in on a few families, each with their own struggles and obstacles, their own dreams and hopes for the future, and the common thread of a helping hand in Evelyn.

From award-winning actress and political activist America Ferrera comes a vibrant and varied collection of first-person accounts from prominent figures about the experience of growing up between cultures.America Ferrera has always felt wholly Americ...

The dramatic true story of two brothers living parallel lives on either side of the U.S.-Mexico border—and how their lives converged in a major criminal conspiracy José and Miguel Treviño were bonded by blood and a shared vision ...

A Country for All
by Jorge Ramos

For decades, fixing the United States’ broken immigration system has been one of the most urgent challenges facing our country, and time and time again, politicians have passed the buck. With anti-immigrant sentiment rising around the country,...

The extraordinary tale of a refugee youth soccer team and the transformation of a small American townClarkston, Georgia, was a typical Southern town until it was designated a refugee settlement center in the 1990s, becoming the first American home f...

The Land of Open Graves
by Jason De Leon

In his gripping and provocative debut, anthropologist Jason De Leon sheds light on one of the most pressing political issues of our time—the human consequences of U.S. immigration policy. The Land of Open Graves reveals the suffering and death...

The Far Away Brothers
by Lauren Markham

The deeply reported story of identical twin brothers who escape El Salvador's violence to build new lives in California—fighting to survive, to stay, and to belong.Growing up in rural El Salvador in the wake of the civil war, the United States...

The extraordinary tale of a refugee youth soccer team and the transformation of a small American townClarkston, Georgia, was a typical Southern town until it was designated a refugee settlement center in the 1990s, becoming the first American home f...

The New Odyssey
by Patrick Kingsley

In the humane tradition of Katherine Boo’s Behind the Beautiful Forevers comes a searing account of the international refugee crisis.On the day of his son’s fourteenth birthday, Hashem al-Souki lay somewhere in the Mediterranea...

"They Take Our Jobs!"
by Aviva Chomsky