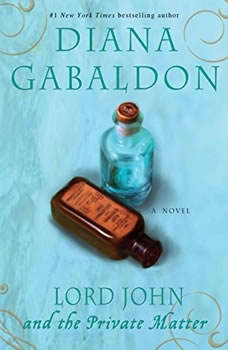 Lord John and the Private Matter

The epic, multivolume Outlander saga is the starting point for a brilliant new series that begins with the novel Lord John and the Private Matter. Filled with intrigue and mystery and starring one of the most popular Outlander characters, Lord John Grey, this fresh new tale is utterly captivating. In a richly drawn 18th-century London, Scottish exile Lord John faces a difficult situation. His cousin Olivia is engaged to marry the Honorable Joseph Trevelyan, but he has just observed something of a rather personal nature that, if confirmed, might put an end to any talk of marital bliss. Determined to investigate further, Lord John is distracted when the Crown calls for his services. A comrade in arms has been slain, and to complicate matters, the victim may have been a traitor. Now Lord John has not one, but two puzzling mysteries to solve.

The Fiery Cross
by Diana Gabaldon

The year is 1771. Claire Randall is still an outlander, out of place and out of time. But now she is linked by love to her only anchor--Jamie Fraser. They have crossed oceans and centuries to build a life together in North Carolina. But tensions, bo...

The Scottish Prisoner
by Diana Gabaldon

Winner of the Quill Award and the Corine International Book Prize, Diana Gabaldon is the #1 New York Times best-selling author of the Outlander series. This fourth novel featuring popular character Lord John Grey is told both from Lord Grey’s...

Echo in the Bone
by Diana Gabaldon

This seventh novel in author Diana Gabaldon’s immensely popular Outlander saga takes listeners on a thrilling journey to 1777 America. Jamie Fraser knows from his time-traveling wife Claire that, no matter how unlikely it seems, America wi...

Lord John and the Private Matter
The Lord John series #1

Lord John and the Hand of Devils
The Lord John series

Lord John and the Brotherhood of th...
The Lord John series #2