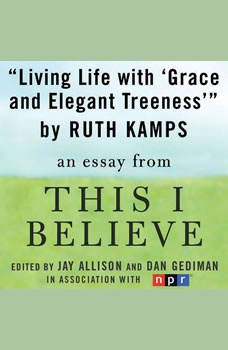 Living Life with Grace and Elegant Treeness: A "This I Believe" Essay

Ruth Kamps finds solace in nature and inspiration in the pine tree growing outside her kitchen window in "Living Life With 'Grace And Elegant Treeness'", her contribution to NPR's This I Believe series.

Living Life with Grace and Elegant ...
This I Believe