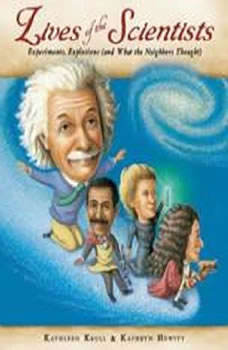 Lives of the Scientists: Experiments, Explosions (and What the Neighbors Thought)

Series: The Lives of Series

Scientists have a reputation for being focused on their work—and maybe even dull. But take another look. Did you know that it’s believed Galileo was scolded by the Roman Inquisition for sassing his mom? That Isaac Newton loved to examine soap bubbles? That Albert Einstein loved to collect joke books, and that geneticist Barbara McClintock wore a Groucho Marx disguise in public? With juicy tidbits about everything from favorite foods to first loves, the subjects of Kathleen Krull and Kathryn Hewitt’s Lives of the Scientists: Experiments, Explosions (and What the Neighbors Thought) are revealed as creative, bold, sometimes eccentric—and anything but dull.

In 1848 Vermont, railroad foreman Phineas Gage sat above a hole, preparing to blast through some granite. A 13-pound iron rod fell from his hands into the hole, triggering the explosion and sending the rod straight through Phineas' head. Thirty minu...

Ada Lovelace (1815-1852) was the daughter of Lord Byron, a poet, and Anna Isabella Milbanke, a mathematician. Her parents separated when she was young, and her mother insisted on a logic-focused education, rejecting Byron's mad love of poetry. Bu...

The Lives of Series Bundle

Lives of the Scientists: Experiment...
The Lives of Series

Lives of Extraordinary Women
The Lives of Series

Lives of the Musicians
The Lives of Series