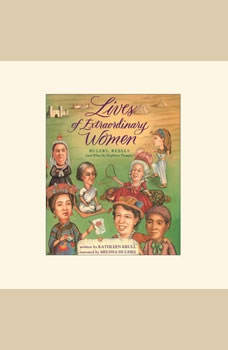 Series: The Lives of Series

Not all governments have been run by men. Lives of Extraordinary Women turns the spotlight on the women who have wielded power, revealing their feats-and flaws-for all the world to see. Here you'll find twenty of the most influential women in history: queens, warriors, prime ministers, first ladies, revolutionary leaders. Some are revered. Others are notorious. But they were all real people with private interests and personalities. What were they really like? What did they do for fun? Did their neighbors gossip about them? What were their tragedies and their triumphs? In this grand addition to their highly praised series, Kathleen Krull and Kathryn Hewitt celebrate some of the world's most noteworthy women-rulers and rebels who refused to stay in the wings and let others run the show. Wild or mild, hated or beloved, each of these women dared to stand up and be a leader.

The Lives of Series Bundle

Lives of Extraordinary Women
The Lives of Series

Lives of the Musicians
The Lives of Series

Lives of the Artists
The Lives of Series