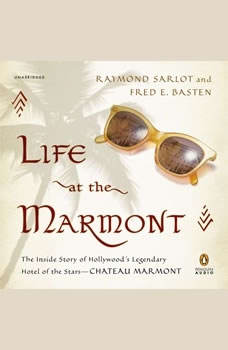 Life at the Marmont: The Inside Story of Hollywood's Legendary Hotel of the Stars--Chateau Marmont

Back in print after two decades, the story of Hollywood’s most exclusive hotel and its star-studded guest list

Raymond Sarlot bought the Chateau Marmont in 1975, but what was originally a business purchase became a love affair as he delved into the hotel’s incredible history. From its perch overlooking the Sunset Strip, the glamorous Marmont reigned for decades as the spot for artists, writers, musicians, and actors of every stripe and remains a home-away-from-home for A-listers like Scarlett Johansson and Johnny Depp. Here, Sarlot and coauthor Fred E. Basten share a wealth of scandalous and intriguing tales about them all, from the stars of Hollywood’s Golden Era like Jean Harlow and Grace Kelly to idols of the sixties and seventies like Jim Morrison and John Belushi (who tragically died there in 1982).

Whether your obsession is Hollywood history or celebrity gossip, Life at the Marmont has plenty of gripping, juicy stories to fascinate.