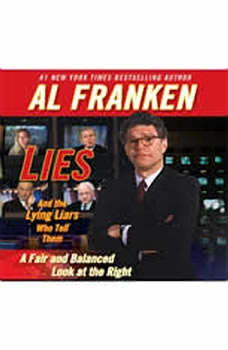 Lies and the Lying Liars Who Tell Them: A Fair and Balanced Look at the Right

For the first time since his bestselling RUSH LIMBAUGH IS A BIG FAT IDIOT, Franken trains his subversive wit directly on the contemporary political scene. Now, the 'master of political humor' (Washington Post) destroys the myth of liberal bias in the media and exposes how the Right shamelessly tries to deceive the rest of us. No one is spared as Al uses the Right's own words against them: not Ann Coulter, Bill O'Reilly, Roger Ailes, the entire Fox network nor the Bush administration. This is the book Al Franken fans have been waiting for (and his foes have been dreading).

The Truth (with jokes)
by Al Franken

Al Franken's landmark bestseller, Lies, and the Lying Liars Who Tell Them…a Fair and Balanced Look at the Right, was praised as a "bitterly funny assault" (The New York Times) that rang "with the moral clarity of an angel's trumpet" (Associate...

Notes From a Small Island
by Bill Bryson

Bill Bryson is an unabashed Anglophile who, through a mistake of history, happened to be born and bred in Iowa. Righting that error, he spent 20 years in England before deciding to repatriate. This was partly to let his wife and children experience...