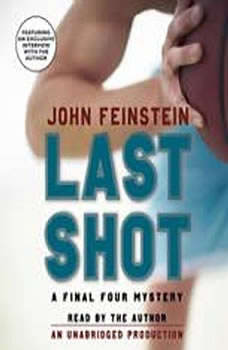 Danny Jordan is one of two lucky winners of the US Basketball Writer's Association's contest for aspiring journalists. His prize? A trip to New Orleans and a coveted press pass for the Final Four. It's a basketball junkie's dream come true!

But the games going on behind the scenes between the coaches, the players, the media, the money-men, and the fans turn out to be even more fiercely competitive than those on the court. Danny and his fellow winner, Brigid-Ann Robinson, are nosing around the Superdome ad overhear what sounds like a threat to throw the championship game. Now they have just 48 hours to figure out who is blackmailing one of MSU's star players . . . and why.

Not Danny, as above, Stevie. Anyway, Stevie and Susan Carol are 8th-grade sports writers who stumble onto a blackmailing scheme at the Final Four in New Orleans. An enjoyable read with interactions that feel authentic. Writing is clean by journalist Feinstein. Narration is enjoyable by the author.