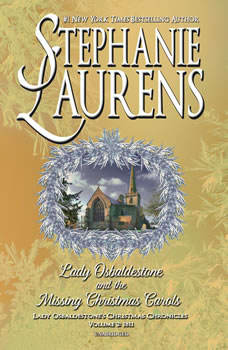 Therese, Lady Osbaldestone, and her household are quietly delighted when her younger daughter's three children, Jamie, George, and Lottie, insist on returning to Therese's house, Hartington Manor in the village Little Moseley, to spend the three weeks leading up to Christmas participating in the village's traditional events.Then out of the blue, one of Therese's older granddaughters, Melissa, arrives on the doorstep. Her mother, Therese's older daughter, begs Therese to take Melissa in until the family gathering at Christmas-otherwise, Melissa has nowhere else to go.Despite having no experience dealing with moody, reticent teenagers like Melissa, Therese welcomes Melissa warmly. The younger children are happy to include their cousin in their plans-and despite her initial aloofness, Melissa discovers she's not too old to enjoy the simple delights of a village Christmas.The previous year, Therese learned the trick to keeping her unexpected guests out of mischief. She casts around and discovers that the new organist, who plays superbly, has a strange failing. He requires the written music in front of him before he can play a piece, and the church's book of Christmas carols has gone missing.Therese immediately volunteers the services of her grandchildren, who are only too happy to fling themselves into the search to find the missing book of carols. Its disappearance threatens one of the village's most valued Christmas traditions-the Carol Service-yet as the book has always been freely loaned within the village, no one imagines that it won't be found with a little application.But as Therese's intrepid four follow the trail of the book from house to house, the mystery of where the book has vanished to only deepens. Will the four unravel the twisted trail of the missing book in time to save the village's Carol Service?