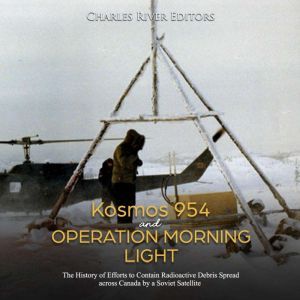 Kosmos 954 and Operation Morning Light: The History of Efforts to Contain Radioactive Debris Spread across Canada by a Soviet Satellite

In the predawn sky of northern Canada on the morning of January 24th, 1978, a long streak of blue fire suddenly rushed across the starry vista northeast of the remote town of Yellowknife. Those out on the bitterly cold night, with a temperature many tens of degrees below zero Fahrenheit, saw a brilliant leading object sheathed in flames, blue or bluish red, and shining with incandescent intensity. Other, smaller objects or fragments shed off it, arcing or tumbling earthwards on their own trajectories. Even in this remote location, a number of individuals saw and reported the unusual phenomenon. Out under the starry dome of the distant north, where celestial objects appeared with burning clarity through the frigid, pure air, they watched the apparition until it vanished in the northeast, somewhere far over Great Slave Lake.

Of the relatively few people who witnessed it, most assumed they witnessed a burning passenger jet crashing. One thought that it might have something to do with lasers after seeing a program about them on television. Others, observing its speed and unusual appearance, recognized they had not seen a crashing aircraft, but had no ready explanation for it at all. Conversely, Canadian and American officials knew precisely what the people of Yellowknife and the surrounding areas witnessed. Within a short time, teams of scientists and security experts boarded aircraft to converge on the deep wilderness where the Soviet spy satellite Kosmos 954 had just crashed into the atmosphere and burned up over Great Slave Lake, strewing radioactive debris over an area of approximately 48,000 square miles. Those efforts would kick off one of the most unique environmental operations in history.

Kosmos 954 and Operation Morning Light: The History of Efforts to Contain Radioactive Debris Spread across Canada by a Soviet Satellite examines how the satellite malfunctioned, the disastrous results, and the efforts to clean up.