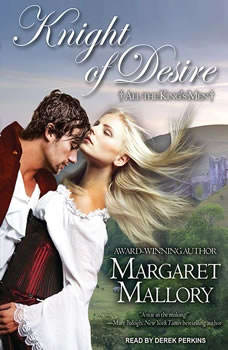 His surcoat still bloody from battle, William FitzAlan comes to claim the strategic borderlands granted to him by the king. One last prize awaits him at the castle gates: the lovely Lady Catherine Rayburn. Catherine risked everything to spy for the crown. Her reward? Her lands are declared forfeit and she is given this choice: marry FitzAlan or be taken to the Tower. Catherine agrees to give her handsome new husband her body, but she's keeping secrets, and dare not give him her heart. As passion ignites and danger closes in, Catherine and William must learn to trust in each other to save their marriage, their land, and their very lives.

The Madness of Lord Ian Mackenzie
by Jennifer Ashley

It was whispered all through London society that he was a murderer, that he'd spent his youth in an asylum and was not to be trusted—especially with a lady. Any woman caught in his presence was immediately ruined. Yet Beth found herself inexor...

Ask For It
by Sylvia Day

Nothing incites Marcus more than the primal hunger roused by his former fiancée, Elizabeth. It’s been years since she jilted him for another man, but that only means there’s a lot to catch up on, a lot to make up for, and that he...

Alex MacLeod's virile physique, fearsome reputation, and renowned fighting skills have helped him master to perfection the role of a hardened mercenary. On a secret mission to protect his clan, he must keep his true purpose well hidden. But his d...

Handsome and dangerous, Patrick MacGregor is a wanted man, possessing the tough, tenacious spirit of his outlawed clan. He will stop at nothing to save his people from destruction, even if it means marrying Elizabeth Campbell, the daughter of hi...

The Serpent Prince
by Elizabeth Hoyt

WHEN THE DEVIL MEETS AN ANGELCountry bred Lucy Craddock-Hayes is content with her quiet life. Until the day she trips over an unconscious man - a naked unconscious man - and loses her innocence forever.HE CAN TAKE HER TO HEAVENViscount Simon Iddesl...

This Duchess of Mine
by Eloisa James

No man can resist Jemma's sensuous allure . . . Except her own husband!Wedding bells celebrating the arranged marriage between the lovely Duchess of Beaumont and her staid, imperturbable duke had scarcely fallen silent when a shocking discovery sen...

The Stranger I Married
by Sylvia Day

Gray was beautiful four years ago, when he asked Isabel to marry him. Now there are no words to describe him. He is no longer young and reckless, not by any stretch of the imagination, but a tormented man, driven by secrets, silent about what heR...

All The King's Men Bundle

Knight of Desire
All The King's Men #1

Knight of Pleasure
All The King's Men #2

Knight of Passion
All The King's Men #3