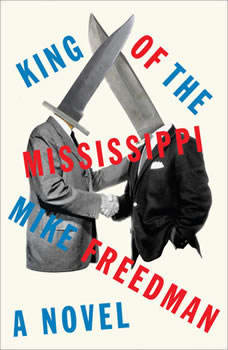 King of the Mississippi: A Novel

A biting, hilarious literary satire of war, business, and contemporary masculinity, set in the cutthroat-but-ridiculous world of management consulting

King of the Mississippi is an incisive, uproarious dissection of contemporary male vanity and delusion, centered around a "war" for dominance of a prestigious Houston consulting firm. On one side of the conflict is Brock Wharton, an old money ex-jock whose delight in telling clients to downsize is matched only by his firm conviction that people like himself deserve to run the world. On the other is Mike Fink, a newly hired wily former soldier trying to ride his veteran status to the top of a corporate world that lionizes "the troops" without truly understanding them. Brock and Mike are mortal enemies on sight, bitterly divided not only by background and class but by diametrically opposed (yet equally delusional) visions of what it means to "be a man." And as their escalating conflict spirals out of control, it will take them all the way from the hidebound boardrooms and gladiatorial football fields of Texas to the vapid and self-serving upper echelon of Silicon Valley, to the corporatized battlefield of Iraq, all the while serving as a ruthlessly funny takedown of the vacuity and empty machismo of corporate life and alpha-male culture in modern America.

Devastatingly witty, unapologetically scathing, and ultimately surprisingly moving, King of the Mississippi marks the arrival of a unique and scintillating new voice in American fiction, one that boldly punctures the myths of American manhood like no one has since the heyday of The Bonfire of the Vanities and American Psycho.