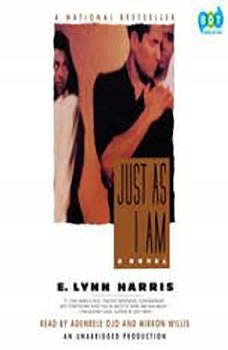 Just As I Am

E. Lynn Harris's blend of rich, romantic  storytelling and controversial contemporary issues like  race and bisexuality have found an enthusiastic and  diverse audience across America. Readers celebrate  the arrival in paperback of his second novel,  Just As I Am, which picks up where  Invisible Life left off,  introducing Harris's appealing and authentic characters to a  new set of joys, conflicts, and choices. Raymond,  a young black lawyer from the South, struggles to  come to terms with his sexuality and with the grim  reality of AIDS. Nicole, an aspiring  singer/actress, experiences frustration in both her career and  in her attempts to find a genuine love  relationship. Both characters share an eclectic group of  friends who challenge them, and the reader, to look at  themselves and the world around thern through  different eyes. By portraying Nicole's and Raymond's  joys, as well as their pain, Harris never ceases to  remind us that life, like love, is about  self-acceptance. In this vivid portrait of contemporary  black life, with all its pressures and the  complications of bisexuality, AIDS, and racism, Harris  confirms a faith in the power of love -- love of all  kinds -- to thrill and to heal, which will warm the  hearts of readers everywhere.

Just As I Am
Invisible Life Trilogy

Abide with Me
Invisible Life Trilogy