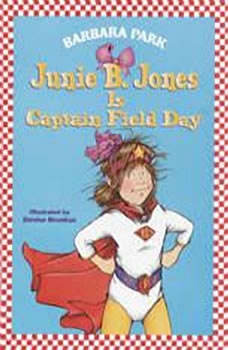 Go, team! With over 50 million books in print, Barbara Park's New York Times bestselling chapter book series, Junie B. Jones, is a classroom favorite and has been keeping kids laughing—and reading—for over 20 years! In the 16th Junie B. Jones book, afternoon kindergarten is having a field day, and Junie B. Jones is team captain! Only, here's the problem. Room Eight keeps on winning too many events. And so how will Room Nine ever become the kindergarten champions? As Captain Field Day, will Junie B. find a way to lead her team to victory? Or will it be up to someone else to save the day?

USA TODAY:
"Junie B. is the darling of the young-reader set."

Kirkus Reviews:
"Junie's swarms of young fans will continue to delight in her unique take on the world….A hilarious, first-rate read-aloud."

Time Magazine:
"Junie B. Jones is a feisty six-year-old with an endearing penchant for honesty."

The Bones of Doom
by Mark Cheverton

After the fall of the zombies, the balance of power between the monsters of the Far Lands of Minecraft is disrupted. The skeleton warlord Rakar grows stronger, and his skeleton army is leaving a terrible path of destruction in their wake. Watcher an...

Stink and the Freaky Frog Freakout
by Megan McDonald

Stink may be super smart and Stink may be uber-clever, but he just can’t seem to turn into a Dolphin. He’s been in the Polliwog swim class for what seems like frog-ever, and still can’t bear to put his face in the water. Then, one ...

The Adventures of a Girl Called Bicycle
by Christina Uss

A determined 12-year-old girl bikes across the country in this quirky and charming debut middle grade novel.Introverted Bicycle has lived most of her life at the Mostly Silent Monastery in Washington, D.C. When her guardian, Sister Wanda, announces ...

The Far Lands is a hidden area located at the very edge of Minecraft’s outer borders, unknown to normal users. There, the life of a young boy named Watcher is suddenly turned upside down when his village is destroyed by the vile zombie warlord...

In the Waves
by Lennon Stella

Join Lennon and Maisy Stella, stars of the hit show Nashville, in their first-ever picture book sing-along adventure.It's the perfect day for fun in the sun as the girls prepare to set off for a sandy paradise. With boogie boards in tow and hom...

Below
by Meg McKinlay

Secrets have a way of floating to the surface.… Mystery, compelling characters, and an abandoned town beneath a lake make for a compelling adventure.On the day Cassie was born, they drowned her town. The mayor flipped a lever and everyone chee...

Into the Spiders' Lair
by Mark Cheverton

The witches of the Far Lands of Minecraft are missing…all of them! When a young village girl is badly injured, and only a witch can help her, Watcher and his friends quickly discover there are spiders involved. They must follow clues leading t...

Fwap! Slish! Bloop! Krunch! He takes down his competition in a single move! No opponent is too big a challenge for the cunning skills of Nino - popsicle eater, toy lover, somersault expert, and world champion lucha libre competitor!

Making a Friend
by Alison McGhee

Clean, cold, white snow! Snow for sledding. Snow for catching on your tongue. Snow for making a SNOWMAN! Is there anything as wonderful as SNOW? Is there any better friend than a SNOWMAN? Snow isn't forever, though. The wind shifts, the weather w...

Get 5% off your total order by adding 3 or more audiobooks from Junie B. Jones