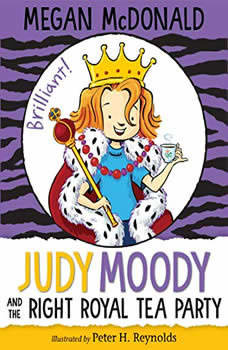 Jolly smashing! Could the Moodys really have royal blood? Judy brings her new look to a comical episode about the ups and downs of exploring a family tree.Judy Moody is in a royal purple-mountain-majesties mood. Make that Majesty with a capital M! With Grandma Lou’s help, Judy has dug up proof that some old-timey Moodys (aka the brave Mudeyes) lived in merry olde England. In fact, if her grandpa’s notes are right, Judy might even be related to — royal fanfare, please — the Queen herself! Should Judy start packing her purple robe for a sleepover at Buckingham Palace? But then Judy’s family tree gets a few more shakes — thanks to her nemesis, Jessica “Fink” Finch — and some more surprises come tumbling out. Crikey! These new gems are not nearly as shiny or sparkly as the crown jewels. Now Judy has some right royal family secrets she’d like to keep hidden away in a dungeon somewhere — and especially away from Jessica, the princess in pink herself!

King Arthur: The Story of How Arthur Became King
by Philip Edwards

Before Arthur commanded a round table of legendary knights in Camelot, he was simply a young squire with dreams of becoming a great knight himself. Arthur lived during a time when Britain was without a ruler, but fate would quickly draw him into the...

Judy Moody and the Bucket List
by Megan McDonald

Drumroll, please: Judy Moody is about to become a poop-scooping, hinny-riding, one-girl band extraordinaire as she takes on her very own Bucket List.Judy is visiting Grandma Lou one day when she accidentally finds an uber-mysterious list of activiti...

Royal Wedding Disaster: From the Notebooks of a Middle School Princess
by Meg Cabot

You are invited to a Genovian Royal Wedding in this second audiobook pulled FROM THE NOTEBOOKS OF A MIDDLE SCHOOL PRINCESS, a Princess Diaries spin-off series, written by New York Times-bestselling author Meg Cabot.Olivia Grace Clarisse Mignonette H...

From the Notebooks of a Middle School Princess
by Meg Cabot

Return to the world of Meg Cabot's bestselling and beloved Princess Diaries series in From the Notebooks of a Middle School Princess...Olivia Grace Clarisse Mignonette Harrison is a completely average twelve-year-old: average height, average weight,...

Royal Crown: From the Notebooks of a Middle School Princess
by Meg Cabot

It’s the first coronation of a female monarch of Genovia in 200 years, and Her Royal Highness, Princess Olivia Grace Clarisse Mignonette Harrison, is giving listeners the inside scoop in this newest audiobook from New York Times—bestsell...

Royal Crush: From the Notebooks of a Middle School Princess
by Meg Cabot

"Are you in a bad mood or something?" asked Rocky."Or something," said Judy Moody.Bad moods, good moods, even back-to-school moods—Judy Moody has them all! When her teacher assigns the class the task of creating "Me" collages, it puts Judy in ...

The Castle Corona
by Sharon Creech

Long ago and far away . . . There was a castle. But not just any castle. This was a castle that glittered and sparkled and rose majestically above the banks of the winding Winono River: the Castle Corona.And in this castle lived a family. But not j...