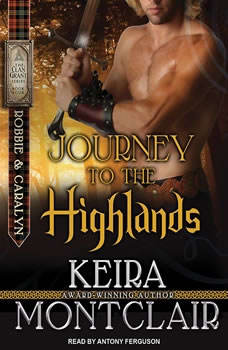 Journey to the Highlands: Robbie and Caralyn

Captain Robbie Grant has always had a way with the lasses, but his warrior's heart is too married to the battlefield to seek out a wife. Then Robbie saves a mysterious beauty from a Norse attacker. He knows little about Caralyn Crauford beyond that she has a damaged past and two wee daughters, but he volunteers to bring her and the lasses to a priory where they will be safe from the oncoming battle. The last thing he expects is for Caralyn to give him a night of unrestrained passion and then disappear. But when she does, he is determined to find her. After spending years under the thumb of men who cared only about her comeliness, Caralyn no longer knows who she is or why she matters. The only thing she cares about is the welfare of her daughters. But when Captain Robbie Grant enters her life, she dares to want something more. At first she's just grateful to the handsome Highlander, but his noble nature and kind heart endear her to him. The night they spend together only confuses her more, but Caralyn has no time to sort through her feelings because her past rears its ugly head and threatens to ruin her.

Journey to the Highlands: Robbie an...
Clan Grant #4