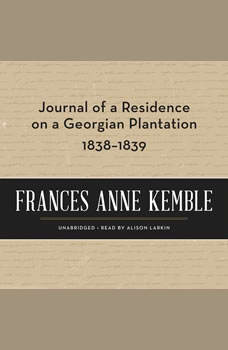 A personal indictment of the institute of slavery in the Southern United States, as witnessed directly by Fanny Kemble, a British actress in 1838 and 1839. Her husband, the heir to the plantations in Georgia, however, forebade her to publish this material on pain of never seeing her daughters again. She complied, until the two daughters had reached the age of twenty-one, and then allowed the journal to be published in 1863, when the Northern troops were already present along the coast near the Altamaha River, where the plantations were located. In a very personal way, she relates her many varied experiences, efforts to make life easier for the slaves despite her husband’s stubborn resistance. As an English citizen, she had seen the total end of slavery throughout the British Empire in 1833, just a few years before her journey to Georgia. She ends her account with a stirring defense of Harriet Beecher Stowe’s novel, Uncle Tom’s Cabin, which had raised such a storm of controversy in the United States. Like Stowe, Kemble sees all sides of the situation, with her eyes and with her heart.