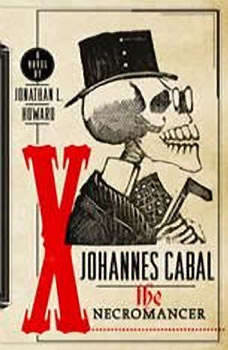 Johannes Cabal, a brilliant scientist and notorious snob, is single-mindedly obsessed in heart and soul with raising the dead. Well, perhaps not soul . . . He hastily sold his years ago in order to learn the laws of necromancy. But now, tormented by a dark secret, he travels to the fiery pits of Hell to retrieve it. Satan, who is incredibly bored these days, proposes a little wager: Johannes has one year to persuade one hundred people to sign over their souls or he will be damned forever.

To make the bet even more interesting, Satan throws in that diabolical engine of deceit, seduction, and corruption known as a “traveling circus” to aid in the evil bidding. What better place exists to rob poor sad saps of their souls than the traveling carnivals historically run by hucksters and legendary con men?

With little time to lose, Johannes raises a motley crew from the dead and enlists his brother, Horst, a charismatic vampire, to be the carnival’s barker. On the road through the pastoral English countryside, this team of reprobates wields their black magic with masterful ease, resulting in mayhem at every turn.

In post-NK3 Los Angeles, a sixty-foot-tall fence surrounds the hills where the rich used to live, but the mansions have been taken over by those with the only power that matters: the power of memory. Life for the community inside the Fence, ruled ov...