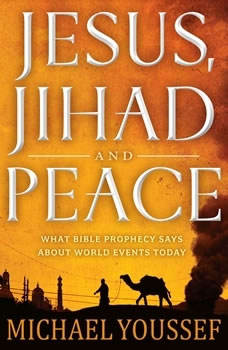 Is there any hope for peace in the world? Or is terror our destiny?&#160;In our post-9/11 world, Westerners in general&mdash;and Christians in particular&mdash;remain targets of Islamic terrorism. From the White House to 10 Downing Street, radical groups like the Muslim Brotherhood are appeased and allowed to operate freely in the West.&#160;In a world that cries out for peace, which will prevail&mdash;Jesus or Jihad?&#160;Bible-believing Christians wonder: What does Islamic extremism mean in terms of Bible prophecy? Do today&rsquo;s turbulent events have prophetic significance?&#160;In Jesus, Jihad and Peace, Dr. Michael Youssef provides answers that are concise and biblically accurate, explaining how trends within Judaism, Christianity, and Islam fit into prophetic history. You will be filled with hope as you see God displaying His character and purpose through current global events.