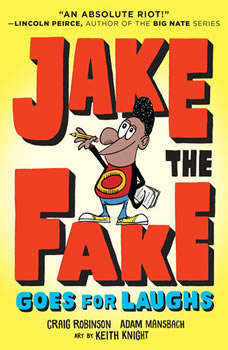 Jake the Fake Goes for Laughs

For fans of Diary of a Wimpy Kid and Big Nate comes the second book in the side-splitting series about a class clown faking his way to comedy stardom from comedian and film star Craig Robinson, #1 New York Timesbestselling author Adam Mansbach, and NAACP History Maker recipient and cartoonist Keith Knight.

Jake cracks up the crowd as a budding comedian at the Music and Art Academy talent show, but his new ego is no laughing matter. And when he starts blowing off his friends to pursue his "art," Jake's big head becomes a huge bummer.

Plus, being the funny man is way tougher than it looks. Luckily, Jake has his mentor Maury Kovalski, a retired comedy showstopper, to teach him the ropes about humor--and humility--before Jake loses all his biggest fans and best friends!

Jake the Fake stuns again with even greater gags and giggles than before!

Born to Rock
by Gordon Korman

Glee: The Beginning
by Sophia Lowell