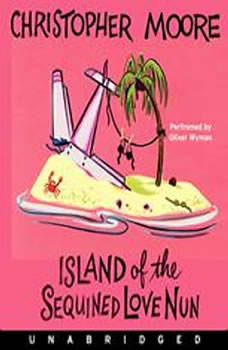 Island of the Sequined Love Nun

Take a wonderfully crazed excursion into the demented heart of a tropical paradise—a world of cargo cults, cannibals, mad scientists, ninjas, and talking fruit bats. Our bumbling hero is Tucker Case, a hopeless geek trapped in a cool guy's body, who makes a living as a pilot for the Mary Jean Cosmetics Corporation. But when he demolishes his boss's pink plane during a drunken airborne liaison, Tuck must run for his life from Mary Jean's goons. Now there's only one employment opportunity left for him: piloting shady secret missions for an unscrupulous medical missionary and a sexy blond high priestess on the remotest of Micronesian hells. Here is a brazen, ingenious, irreverent, and wickedly funny novel from a modern master of the outrageous.

First time in trade paperback: the fourth novel in the #1 New York Times bestselling series. Vampire hunter and zombie animator Anita Blake is an expert at sniffing out the bad from the good. But in The Lunatic Cafe-now in trade paperback for the f...

One Door Away From Heaven
by Dean Koontz

#1 NEW YORK TIMES BESTSELLER Michelina Bellsong is on a mission. She is following a missing family to the edge of America . . . to a place she never knew existed—a place of terror, wonder, and shattering revelation. What awaits ...

The Corrections
by Jonathan Franzen

The Corrections is a grandly entertaining novel for the new century -- a comic, tragic masterpiece about a family breaking down in an age of easy fixes. After almost fifty years as a wife and mother, Enid Lambert is ready to have some fun. Unfortuna...

His books are so fun to read. I love his brash, funny, blunt and charming sense of humor. I laugh out loud reading his books. I could really picture this book being a movie. Can't wait to read more by this author, he's my new favorite!