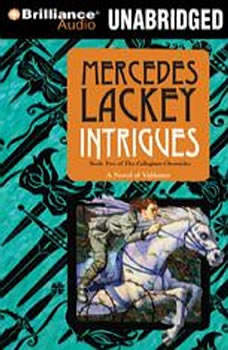 Mags was an orphan and slave of “bad blood” who toiled a gem mine all his young life. He would have died before adulthood, had he not been Chosen and taken to Haven to be trained in the new Herald Collegium.Now, Mags was never hungry and never cold. He slept in a real bed in his own room and, most importantly, he had Dallen, who was like another part of himself. And yet, aside from Lena and Bear, both loners like he was, he couldn’t relate to most of the Herald, Healer, or Bard trainees. He was the only trainee who came from what—to the others—was unimaginable poverty. There was another factor that contributed to Mag’s isolation. Foreign assassins, masquerading at court as envoys were discovered. As they fled from the Guard, one of them seemed to “recognize” Mags. Now, Mags was an object of suspicion.He had always been curious about his parents, but after the incident it became urgent for Mags to discover exactly who his parents were. And at Haven, he had access to the extensive Archives. Poring through the Archives, he got only incomplete information: his parents, found dead in a bandit camp, had been two of a number of hostages, some of whom had survived. The survivors had told the Guard that Mags’s parents spoke a language that no one understood or recognized.This information did not help, for the ForeSeers had been having visions of the king’s assassination by “one of the foreign blood.” Some had even Seen Mags with blood on his hands. How could Mags defend himself against a crime that hadn’t yet been committed?