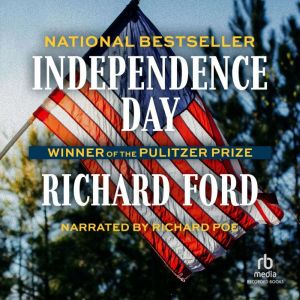 Hailed as a major American novel, Independence Day is a relentlessly thoughtful, heart-wrenching, yet hilarious portrait of an ordinary American man. Wickedly realistic details and dialog entice you to see modern life filtered through the first-person narrator's complex and evolving consciousness. Apparently directionless since his divorce, Frank Bascombe migrates from one non-committal relationship to another. He freely indulges his tendencies to self absorption, over-intellectualization, and neurotic ambivalence. But all of that changes one fateful Fourth of July weekend, when, armed with the Declaration of Independence, he embarks on a mission to save his troubled teenaged son. Author of The Sportswriter, Richard Ford has won wide recognition as one of our most talented living novelists. Richard Poe's deep, resonant voice augments his powerful characterizations and puts you on intimate terms with one of the most unforgettable characters in American fiction.