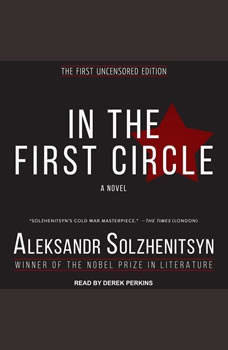 In the First Circle

Moscow, Christmas Eve, 1949. The Soviet secret police intercept a call made to the American embassy by a Russian diplomat who promises to deliver secrets about the nascent Soviet Atomic Bomb program. On that same day, a brilliant mathematician is locked away inside a Moscow prison that houses the country's brightest minds. He and his fellow prisoners are charged with using their abilities to sleuth out the caller's identity, and they must choose whether to aid Joseph Stalin's repressive state—or refuse and accept transfer to the Siberian Gulag camps . . . and almost certain death. First written between 1955 and 1958, In the First Circle is Solzhenitsyn's fiction masterpiece. In order to pass through Soviet censors, many essential scenes—including nine full chapters—were cut or altered before it was published in a hastily translated English edition in 1968. Now with the help of the author's most trusted translator, Harry T. Willetts, here for the first time is the complete, definitive English edition of Solzhenitsyn's powerful and magnificent classic.

By the Rivers of Babylon
by Nelson DeMille