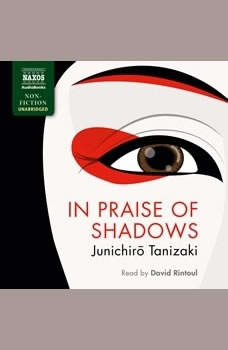 In Praise of Shadows

‘Were it not for shadows there would be no beauty.’ In Praise of Shadows is an eloquent tribute to the austere beauty of traditional Japanese aesthetics. Through architecture, ceramics, theatre, food, women and even toilets, Tanizaki explains the essence of shadows and darkness, and how they are able to augment beauty. He laments the heavy electric lighting of the West and its introduction to Japan, and shows how the artificial, bright and polished aesthetic of the West contrasts unfavorably with the moody and natural light of the East. Dreamy, melancholic and mysterious, In Praise of Shadows is a haunting insight into a forgotten world.