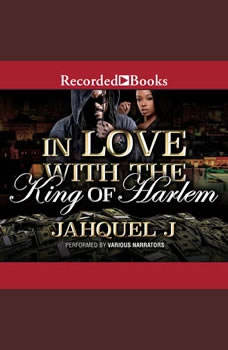 In Love With the King of Harlem

Qua loves Wynner. Wynner loves Qua. Easy enough, right? But Wynner came with two brothers who couldn't stand Qua with their baby sister. Qua couldn't stand not having Wynner with him, even if he didn't have his life together. With faith, his word and love, he grabs his love's hand and marries her at the court house. Flash forward five years, and all the promises that Qua has made Wynner he has come through on them. To stay true, secure the bag & be her ace through all her pain. With Wynner always being sick, everyone babies her and is always worried about her. As a wife, she supposed to nurture and cater to her husband, but always being sick, she feels less than a wife. When Qua's childhood friend comes to the city, she's sure to shake things up between the couple. Will they take their vows to heart? Or will Uzi be making his baby sister a widow? Uzi is feared by everything with a beating heart in New York. He and his brother's name ring bells in the New York City streets. If you and the Mcknight brother's name are mentioned in the same breath, you know you won't live to speak about it. With no time for a woman, Uzi usually slides in women and dip after. But, when a smart talking bartender at his favorite strip club catches his eyes he chases her like a lion does an antelope. Remi is so over men wasting her time & spitting game that she doesn't want to play. Working two jobs, she doesn't have time for games. When Uzi approaches her at work, both their words collide at full force. In a situationship, she continues to ignore Uzi until it becomes too much to handle. Will Uzi eventually shoot a arrow in her heart? Girl, take it all off cause I know you extra, Future's words couldn't ring truer for Remi's younger sister, Tweeti. Being the heavier of the two, she's was always overlooked as a child. Until now, where all the boys that played her for being plus sized, are same men chasing her. Tweeti doesn't know what she wants to do with her life. One week she wants to save lives then the next she wants to take them. When Jahquel rolls into her life, she's taken back. Never being with a man in a wheel chair, she shuts him down. What happens when Jah eventually captures her heart? Jahquel used to run the same streets his older brother now owns. A gun shot to the back stopped that, but it didn't stop his ruthless and rude demeanor. Being paralyzed limits some things, but when he runs into Tweeti, he feels like the sky is the limit. Tweeti couldn't be less interested than being just friends. Never being one to give up, he continues to pursue Tweeti. Will he eventually wear her down? In New York where you gotta go hard, these kings need to reign with an iron fist, but will they do it with or without queens?