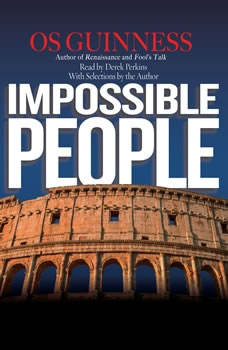 Impossible People: Christian Courage and the Struggle for the Soul of Civilization

The church in the West is at a critical moment. While the gospel is exploding throughout the global south, Western civilization faces militant assaults from aggressive secularism and radical Islam. Will the church resist the seductive shaping power of advanced modernity? More than ever, Christians must resist the negative cultural forces of our day with fortitude and winsomeness. What is needed is followers of Christ who are willing to face reality without flinching and respond with a faithfulness that is unwavering. Os Guinness describes these Christians as "impossible people," those who have "hearts that can melt with compassion, but with faces like flint and backbones of steel who are unmanipulable, unbribable, undeterrable and unclubbable, without ever losing the gentleness, the mercy, the grace and the compassion of our Lord." Few accounts of the challenge of today are more realistic, and few calls to Christian courage are more timely, resolute?and hopeful. Guinness argues that we must engage secularism and atheism in new ways, confronting competing ideas with discernment and fresh articulation of the faith. Christians are called to be impossible people, serving an Impossible God.

Since when did believing in God and having moral values make you pro-war, pro-rich, and solely pro-Republican? And since when did promoting and pursuing a progressive social agenda with a concern for economic security, health care, and educational ...

Secular Sabotage
by William A. Donohue

This assault is not happening from accident or whim. It is happening because disaffected liberals have deliberately set out to upend our Judeo-Christian traditions. Indeed, they are determined to tear down the traditional norms, values, and institu...

Jay Sekulow—one of America’s most influential attorneys—explores the current political landscape in which bureaucracy has taken over our government and provides a practical roadmap to help take back our personal liberties.Jay Sekul...

Popular books such as The God Delusion have dismissed religion as a delusional artifact of evolution and ancient superstitions. But should millions of Americans’ statements of belief and their behavior be dismissed that quickly? The pattern of...

Ask the Question
by Stephen Mansfield

For most of American history, the conventional wisdom was that religion was too private a matter to ask a political candidate about. But in a political landscape in which we will see Muslims, atheists, Mormons, Buddhists, and Christians of all strip...

The Myth of a Christian Nation
by Gregory A. Boyd

The Path through Politics Is Not the Road to GodWhen the kingdom of God is manifested, it will wear the face of Jesus Christ. And that, says author Gregory Boyd, has never been true of any earthly government or power. Through close examination of Sc...

The Great Awakening
by Jim Wallis

What will it take to solve the biggest issues of our time: extreme and needless poverty, global warming and environmental degradation, terrorism and the endless cycle of violence, racism, human trafficking, health care and education, and other pres...

What should a Christian say when confronted with today's burning political questions? How can a person of faith use the Bible as a resource when navigating controversial cultures issues? Skyline Church Pastor James L. Garlow presents Well-V...