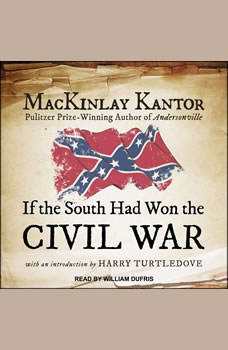 If The South Had Won The Civil War

Just a touch here and a tweak there . . . MacKinlay Kantor, Pulitzer Prize-winning author, master storyteller, shows us how the South could have won the Civil War, how two small shifts in history (as we know it) in the summer of 1863 could have turned the tide for the Confederacy. What would have happened: to the Union, to Abraham Lincoln, to the people of the North and South, to the world? If the South Had Won the Civil War originally appeared in Look Magazine nearly half a century ago. It immediately inspired a deluge of letters and telegrams from astonished readers and became an American classic overnight. Published in book form soon after, Kantor's masterpiece has been unavailable for a decade. Now, this much requested classic is once again available for a new generation of listeners. It all begins on that fateful afternoon of Tuesday, May 12, 1863, when a deplorable equestrian accident claims the life of General Ulysses S. Grant . . .