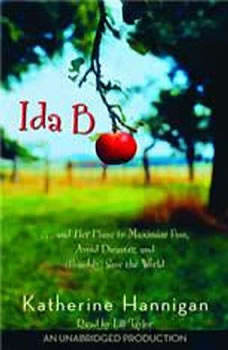 Ida B: ...and Her Plans to Maximize Fun, Avoid Disaster, and (Possibly) Save the World

Who is Ida B. Applewood? She is a fourth grader like no other, living a life like no other, with a voice like no other, and a family like no other, and her story will resonate long after this audiobook has ended. How does Ida B. cope when outside forces--life, really--attempt to derail her and her family and her future? She enters her Black Period, and it is not pretty. But then, with the help of a patient teacher, a loyal cat and dog, her beloved apple trees, and parents who believe in the same things she does (even if they sometimes act as though they don't), the resilience that is the very essence of Ida B. triumphs . . . and Ida B. Applewood takes the hand that is extended and starts to grow up.

This first novel is both very funny and extraordinarily moving, and it introduces two shining stars, author Katherine Hanningan and Ida B. Applewood.

This witty, heartfelt story about perseverance in the face of adversity is perfect for fans of R. J. Palacio, Cammie McGovern, and John David Anderson.Noah Savino has been stuck in a wheelchair for months. He hates the way people treat him like he&...

My lips are white. Sixteen-year-old Sep stares into the bathroom mirror. It’s not some weird lipstick (she never wears lipstick). Her lips are just — white. In a panic, she digs up an old lipstick and smears it on her colorless lips. ...

Llama has a sharing drama! Build a tower. Make a moat. Nelly's dolly sails a boat. What can Llama Llama add? Maybe sharing's not so bad. Llama Llama has new neighbors! Nelly Gnu and her mama stop by for a play date, but Llama's not so sure it's time...

Running Out of Time
by Margaret Peterson Haddix

Jessie lives with her family in the frontier village of Clifton, Indiana. When diphtheria strikes the village and the children of Clifton start dying, Jessie’s mother sends her on a dangerous mission to bring back help.But beyond the walls of ...

Rachel Brooks is excited for the new school year. She's finally earned a place as a forward on her soccer team. Her best friends make everything fun. And she really likes Tate, and she's pretty sure he likes her back. After one last appointment with...

True: Delly Pattison likes surpresents (presents that are a surprise). The day the Boyds come to town, Delly's sure a special surpresent is on its way. But lately, everything that she thinks will be good and fun turns into trouble. She's never need...