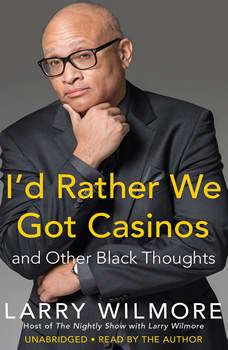 I'd Rather We Got Casinos: And Other Black Thoughts

Within these pages are the musings, the revelations, the ruminations, and the reflections of the incomparable Larry Wilmore. Here, collected for the first time, all in one place, are his Black Thoughts. From why black weathermen make him feel happy (or sad) and why brothas don't see UFOs to his search for Black Jesus or his quest to replace "African-American" with "chocolate," Wilmore has finally relented, agreeing to share his unique (black) perspective. Soon, you too will have the ability to find racism in everything. Bring back the Shetland Negro and do away with Black History Month! After all, can twenty-eight days of trivia really make up for centuries of oppression? In Wilmore's own words, "I'd rather we got casinos!"