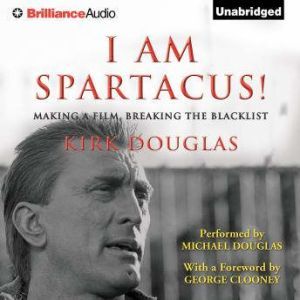 I Am Spartacus!: Making a Film, Breaking the Blacklist

One of the world’s most iconic movie stars, Kirk Douglas has distinguished himself as a producer, philanthropist, and author. Now, more than fifty years after the release of his enduring epic Spartacus, Douglas reveals the riveting drama behind the making of the legendary gladiator film. Douglas began producing the movie in the midst of the politically charged era when Hollywood’s moguls refused to hire anyone accused of Communist sympathies. In a risky move, Douglas chose Dalton Trumbo, a blacklisted screenwriter, to write Spartacus.As both producer and star of the film, Douglas faced explosive moments with young director Stanley Kubrick and struggles with giant personalities, including Sir Laurence Olivier, Charles Laughton, and Peter Ustinov. Writing from his heart and from his own meticulously researched archives, Kirk Douglas, at ninety-five, looks back candidly—and often with self-effacing humor—at his audacious decision to give public credit to Trumbo, thus effectively ending the notorious Hollywood blacklist.