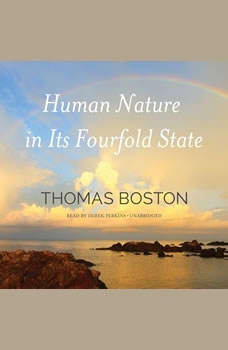 Human Nature in Its Fourfold State

Thomas Bostons Human Nature in Its Fourfold State is often regarded as one of Christian literatures best discourses on human nature, tracing it from its perfect beginnings in Eden, through the fall of man, and on to its final state in eternity. According to Boston, the four states of man are the state of innocence, in which God made him; the state of nature, as he has unmade himself; the state of grace, as created in Jesus Christ; and the eternal state, as made by the Judge of All Things. Bostons remarkable insight makes this book a must-listen for Christians the world over.

“The end times.” “The apocalypse.” “The day of judgment.” Terms such as these are both fascinating and frightening for any student of God’s Word. They point to key questions people have wrestled with for ce...

All of us long to know what life after death will be like. Bestselling author John Burke is no exception. In Imagine Heaven, Burke compares over 100 gripping stories of near-death experiences (NDEs) to what Scripture says about o...

The God I Never Knew
by Robert Morris

Who is the Holy Spirit, and exactly what does He do? Many people find the Holy Spirit mysterious and confounding.  Why is the third person in the Godhead—the one Jesus said would be the believer’s ultimate source of truth and comfor...

Dr. Tony Evans, one of the most respected church leaders in the country, is the founder and senior pastor of Oak Cliff Bible Fellowship in Dallas, a thriving congregation of 8000. In this timely, unique exploration of spiritual warfare, Dr. Evans un...

Harmful habits, negative thinking, and irrational feelings can all lead to sinful behavior and keep you in bondage. If you feel trapped by any of these strongholds in your life, know that you are not aloneyou can break free. Neil Anderson has brough...