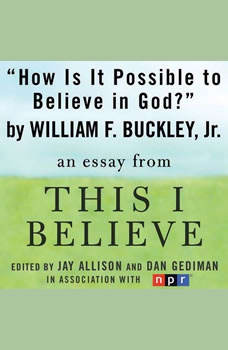 How Is It Possible to Believe in God?: A "This I Believe" Essay

Public intellectual, conservative author and political commentator William F. Buckley, Jr., speaks to his belief in divine creation in "How Is It Possible To Believe In God?", his contribution to NPR’s This I Believe series.

How Is It Possible to Believe in Go...
This I Believe