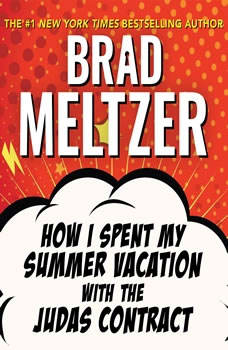 How I Spent My Summer Vacation with the Judas Contract

What one reviewer called "my near-sexual fascination" with a comic book character. Originally published in Give Our Regards to the Atom-Smashers!

The Dilbert Principle
by Scott Adams

The creator of Dilbert, the fastest-growing comic strip in the nation, takes a look at corporate America in all its glorious lunacy.These hilarious essays on incompetent bosses, rampant management fads, bewildering technological changes, and so muc...

From Mel Blanc to June Foray, from Disney to Hanna-Barbera, Cartoon Carnival is a lively hour of rare and classic cartoon audio, children's records, cartoon music and sound effects, new radio cartoons, interviews, and mini-documentaries about the wo...

This collection includes all four volumes of The Best of Cartoon Carnival.As the protege of cartoon voice legend Daws Butler, veteran award-winning broadcaster Joe Bevilacqua is no stranger to the cartoon world. From Mel Blanc to June Foray, from Di...

This second collection of fractured fables are from the unique mind of Daws Butler, the man who voiced most of the classic Hanna-Barbera charactersYogi Bear, Huckleberry Hound, Quick Draw McGraw, and Snagglepuss, to name a few. Uncle Dunkle and Don...

From Mel Blanc to June Foray, from Disney to Hanna-Barbera, Cartoon Carnival is a lively hour of rare and classic cartoon audio, childrens records, cartoon music and sound effects, new radio cartoons, interviews, and mini-documentaries about the won...

The Best of Cartoon Carnival, Volume 3
by Joe Bevilacqua

New and remastered productions by the voices of Yogi Bear, Boo Boo, Doggie Daddy, and more! This audio is produced with wonderful sound effects and music by veteran radio theater producer Joe Bevilacqua, and performed by husband and wife team Joe Be...

The Best of Cartoon Carnival, Volume One
by Joe Bevilacqua

As heard on Sirius XM Radio and NPR stations! As the protg of cartoon voice legend Daws Butler (Yogi Bear), veteran award-winning broadcaster Joe Bevilacqua is no stranger to the cartoon world. From Mel Blanc to June Foray, from Disney to Hanna-Bar...

Uncle Dunkle and Donnie
by Joe Bevilacqua and Daws Butler

A seal who cant balance? An elephant who always forgets? A green cow who walks on her front feet? These are just some of the wacky characters from the unique mind of Daws Butler, the man who voiced most of the classic Hanna-Barbera charactersYogi Be...