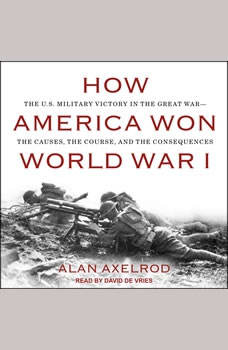 How America Won World War I

Immediately after the armistice was signed in November, 1918, an American journalist asked Paul von Hindenburg who won the war against Germany. He was the chief of the German General Staff, co-architect with Erich Ludendorff of Germany's Eastern Front victories and its nearly war-winning Western Front offensives, and he did not hesitate in his answer. "The American infantry," he said. He made it even more specific, telling the reporter that the final death blow for Germany was delivered by "the American infantry in the Argonne." The British and the French often denigrated the American contribution to the war, but they had begged for U.S. entry into the conflict, and their stake in America's victory was, if anything, even greater than that of the United States itself. But How America Won World War I will not litigate the points of view of Britain and France. The book will accept as gospel the assessment of the top German leader whose job it had been to oppose the Americans directly—that the American infantry won the war—and this book will tell how the American infantry did it.