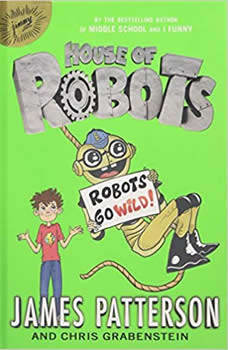 House of Robots: Robots Go Wild!: Booktrack Edition adds an immersive musical soundtrack to your audiobook listening experience! *In book two of the House of Robots series, it's 'bot brains versus 'bot brawn in an all-out war!Sammy Hayes-Rodriguez and his "bro-bot" E are making new friends every day as E works as his bedridden sister Maddie's school proxy. But disaster strikes when E malfunctions just in time to be upstaged by the super-cool new robot on the block-and loses his ability to help Maddie. Now it's up to Sammy to figure out what's wrong with E and save his family!*Booktrack is an immersive format that pairs traditional audiobook narration to complementary music. The tempo and rhythm of the score are in perfect harmony with the action and characters throughout the audiobook. Gently playing in the background, the music never overpowers or distracts from the narration, so listeners can enjoy every minute. When you purchase this Booktrack edition, you receive the exact narration as the traditional audiobook available, with the addition of music throughout.