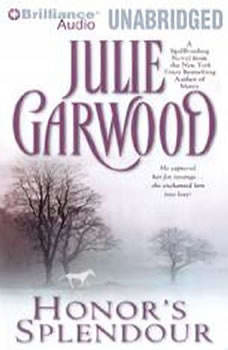 In the feuding English court, gentle Lady Madelyne suffered the cruel whims of her ruthless brother, Baron Louddon. Then, in vengeance for a bitter crime, Baron Duncan of Wexton — the Wolf — unleashed his warriors against Louddon's domain. Exquisite Madelyne was the prize he captured...but when he gazed upon the proud beauty, he pledged to protect her with his life. In his rough-hewn castle, Duncan proved true to his honor. But when at last their noble passion conquered them both, she surrendered with all her soul. Now, for love, Madelyne would stand fast...as bravely as her Lord, the powerful Wolf who fought for Honor's Splendour.

When Lady Venetia Campbell is kidnapped at pistol point by her father’s sworn enemy, Sir Lachlan Ross, she discovers the wickedly sexy Scot is even more intoxicating than she remembers . . . and much more dangerous. Lachlan plans to use her as...

This and Saving Grace are Julie Garwood's best books. I loved the interaction between Madelyn and Duncan. I just wish Julie had a better editor because there are a few times when she uses hackneyed phrases, etc. But story-wise, it is SO good.