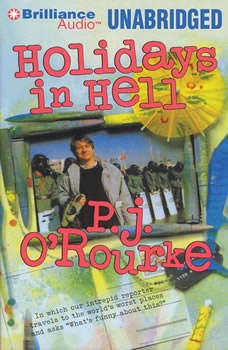 Holidays in Hell: In Which Our Intrepid Reporter Travels to the World's Worst Places and Asks, 'What's Funny About This'

Holidays in Hell follows P. J. O’Rourke on a global fun-finding mission to the most desperate places on the planet, from the bombed-out streets of Beirut to the stultifying blandness of Heritage USA. P.J.’s unforgettable adventures abroad include storming student protesters’ barricades in South Korea, interviewing Communist insurrectionists in the Philippines, and going undercover in Arab garb at Jerusalem’s Dome of the Rock Mosque.Packed with P.J.’s classic riffs on everything from Polish nightlife under communism to Third World driving tips, Holidays in Hell is one of the best-loved books by one of today’s most celebrated humorists — a full-tilt, no-holds-barred romp through politics, culture, and ideology.“This is funny, outrageous, perceptive stuff, written with brio.” —The Washington Post Book World“O’Rourke. . . seems to have teethed on brass knuckles and suckled on bile. He is also one of the funniest writers in America, or wherever else he may go to satisfy his desperate need to extract humor from folly and chaos.” —Time“To say that P. J. O’Rourke is funny is like saying that the Rocky Mountains are scenic — accurate but insufficient. At best he’s downright exhilarating.” — Chicago Tribune