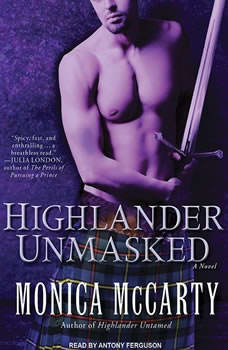 Alex MacLeod's virile physique, fearsome reputation, and renowned fighting skills have helped him master to perfection the role of a hardened mercenary. On a secret mission to protect his clan, he must keep his true purpose well hidden. But his dangerous endeavor is threatened by a beautiful woman he saves from outlaws, never dreaming she will appear at court and put his plans in jeopardy. Meg Mackinnon needs a strong husband by her side to defend her clan's holdings, but her search has been hampered by burning fantasies of the midnight rescuer whose smoldering blue eyes and raw sensuality left her breathless. Alex pretends to be a mercenary with no loyalties, yet he is clearly much more. As Meg challenges Alex to reveal all his secrets, the stakes grow perilously high, especially for the bold woman who dares to unmask a highlander.