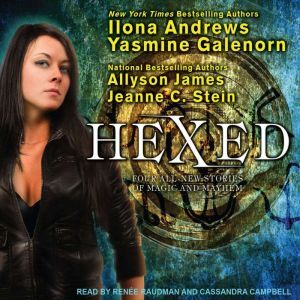 From bestselling authors Ilona Andrews, Yasmine Galenorn, Allyson James, and Jeanne C. Stein comes an anthology of four all-new novellas featuring powerful women who know how to handle a hex or two. In "Double Hexed" from Allyson James, a novella of the Stormwalker series, Janet and her friends find themselves locked in her hotel, victims of a hex cast by a very powerful sorcerer. And, as they work to release the spell before the sorcerer kills them all, they realize that their worst enemies just might be themselves. In "Blood Debt" from Jeanne C. Stein, bounty-hunter-turned-vampire Anna Strong is visited by three witches who ask her to right an old magical wrong. Anna will have to live up to her name to make it through alive. In "Magic Dreams" from Ilona Andrews, old legends and frightening nightmares come to life. The shapeshifting Tigress Dali Harimau finds herself in deep water when she must challenge a dark being to a battle of wits, or risk losing the man she secretly longs for. Finally, in Yasmine Galenorn's "Ice Shards," Iris Kuusi, a Finnish house sprite who lives with the D'Artigo sisters, must journey to the frozen Northlands to confront the crazed shadow of the former lover she's accused of murdering, so she can break the curse keeping her from marrying the man she loves. This is a must-listen collection for fans of the paranormal.